Okay I have been answering questions on ‘Quora’ a lot, but the problem I’m finding is that people are asking the wrong questions. What about the big stuff I wonder. People often try to answer the difficult ones by simply going with their ‘gut instinct’ etc, “I feel I am loved by a higher power, I know I have been given a purpose, I choose to believe….” but I would like to propose, within this site and as a sort of experiment, to try and derive the answers to all questions, be they large or small, simply by the use of pure logic. The way Sheldon Cooper might! (Please hear the rest of this blog in his voice.)

So to the first question:

People have been asking this question because it is a subject that is broached in my brilliant novel ‘Adriana’ [ see http://www.lusardibooks.com ] It is a fictional work and therefore not everything within it should be taken too seriously, so please don’t, but more than that (no spoilers) I would prefer not to go into here!

If you were to count all of the atoms that constitutes what one might call ‘conventional matter’ (Baryonic matter) in the universe (Ignoring, for the time being, strange stuff like dark matter and dark energy) then you could represent the entire distribution of the elements within the universe, in the following manner.

Which probably goes some way to explaining why, constituting the human body, the atomic ratio of the elements is as follows:

Life uses what is available! We are mostly water, H2O!

So what is the point of all this?

Well it seems extremely unlikely that any of the hydrogen atoms, in your body, were originally made by a star. You see, just as kids destroy pizza, stars destroy hydrogen; it’s their primary fuel.

But there’s more. Whilst it is very easy to see how carbon could be represented as being dust, hydrogen, oxygen, nitrogen? None of these elements do we normally associate with dust as they spend most of their time existing, at least on earth that is, as gases. Sure you can combine hydrogen and oxygen to make water. Oxygen will combine with lots of stuff too. One could accuse me of being a bit of a nitpicker with this complaint but why dust? Is it supposed to make someone think of fairy dust perhaps? How absurd!

Finally there is the question of the origin of the subatomic particles involved in all matter that we observe. You see, no proton, no neutron, (the building block of matter and us) for example, was ever created by a star. For their origin you need to go back to the Big Bang. The material that makes up all of atoms that constitute us, and all the physical things that surround us, is actually very nearly as old as the universe itself and pre-dates the existence of any star!

So the next time you see a well-known professor (like the good ‘Prof Colin Dicks’ in my book) staring up at the sky with tears in his eyes, whilst pronouncing on the glorious revelation that we are all stardust, do please remember that those tears he is crying, consisting mostly of two parts hydrogen to one part oxygen, may be made of atoms, the majority of which have never been anywhere near a star. (Personaly I blame the song.)

A Star Is Born

Well that was a pretty good rant. I hope you enjoyed it. I know I did, but you may be asking yourself, was there any point to it. Well I believe there was, so here comes another one.

You see nearly everyone I know is now walking around thinking that they are star stuff. I imagine them lying in the baths looking down at their belly buttons in awe and wonder, amazed that the entirety of all of them was created within the heart of a star.

The problem is that sooner or later, perhaps due to people like me, people are going to realize that the statement ‘we are all star dust’ that is currently being broadcast, throughout the media, on a regular basis is, at the very least, a little misleading. Perhaps an attempt is being made to beguile, the assumed to be completely ignorant public, with pseudo-poetic insights, but I thought science was all about discerning the truth of things. Wouldn’t it be better if these people left poetry to the poets and concentrated on understanding and then disseminating the actual facts?

So why is that important, one might ask? Well of course the truth is always important but doubly so in our modern world. You see, serious scientists are warning us about global warming, seas polluted with plastic and toxins, the destruction of the rain forests, the possibility of a nuclear or biological holocaust or the extinction of humanity brought about by a celestial event, such as the one that took out most, but not all of the dinosaurs. The list goes on!

Just look around you. People applying scientific principals have been getting at the truth of things quite well haven’t they! Could you build the screen you’re looking at? Yet we live in a world full of people, some of them politicians, who seem to think they know better: 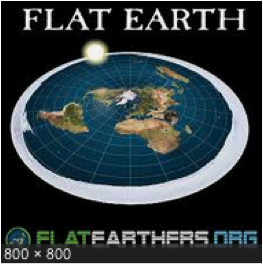 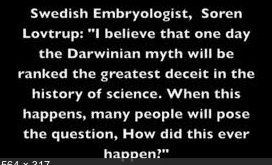 The problem is that we need to be listening to what the real science is telling us, but when the so-called experts in the media talk, what in the fullness of time can be shown to be a load of old tosh, then they play into the hands of the conspiracy theorists and trumped up doubters like those indicated above. Everybody who has a vote, has a vote regardless of what they know or understand and every politician isn’t necessarily expert at anything other than perhaps making speeches. So it is important that when the voice of science is heard, it imparts clear and accurate information that we can all, always trust. Break that trust and you create a void that can be filled with the sort of dogma and ignorance that this world has been plagued with for far too long and at a time when we  no longer have the luxury of simply beleiving whatever suits us. A time when our collective ability to understand the true nature of our situation may prove to be a significant factor in determining whether our species (made of stardust or otherwise) actualy has any kind of long term future atall.

If you liked that please have a look at this:

Next blog: The Drake Equation

Apparently we are surrounded by intelligent life thriving throughout the universe. That’s good to know isn’t it!

In my life I have been a university lecturer, an inventor, a plasterer’s assistant, a recording engineer, a record producer and a song and music writer for both film and commercial release. I have also owned and run a number of recording studios (all called Mark Angelo Recording Studios ) and now I am an author. Science was always my first love. As a child, on birthdays and Christmas, it was not train sets and toy cars for me. All I wanted was books. Books about palaeontology, astronomy, biology or physics. That was until I encountered my first science fiction book. I was hooked. Isaac Asimov, Arthur Clark, Philip K Dick, Harlan Ellison and many others became, for me, new heroes to stand alongside Einstein, Newton, Heisenberg and Maxwell. You could say that these are the people that, to a large extent must bear the responsibility for creating the person that I am today. So after many years of doing just about everything else I have, perhaps now in my second childhood, finally decided to go back to the things I always loved the most and this time emulating the greats, dared to write a book of my own. View all posts by glassssman

6 thoughts on “ARE WE STARDUST?”